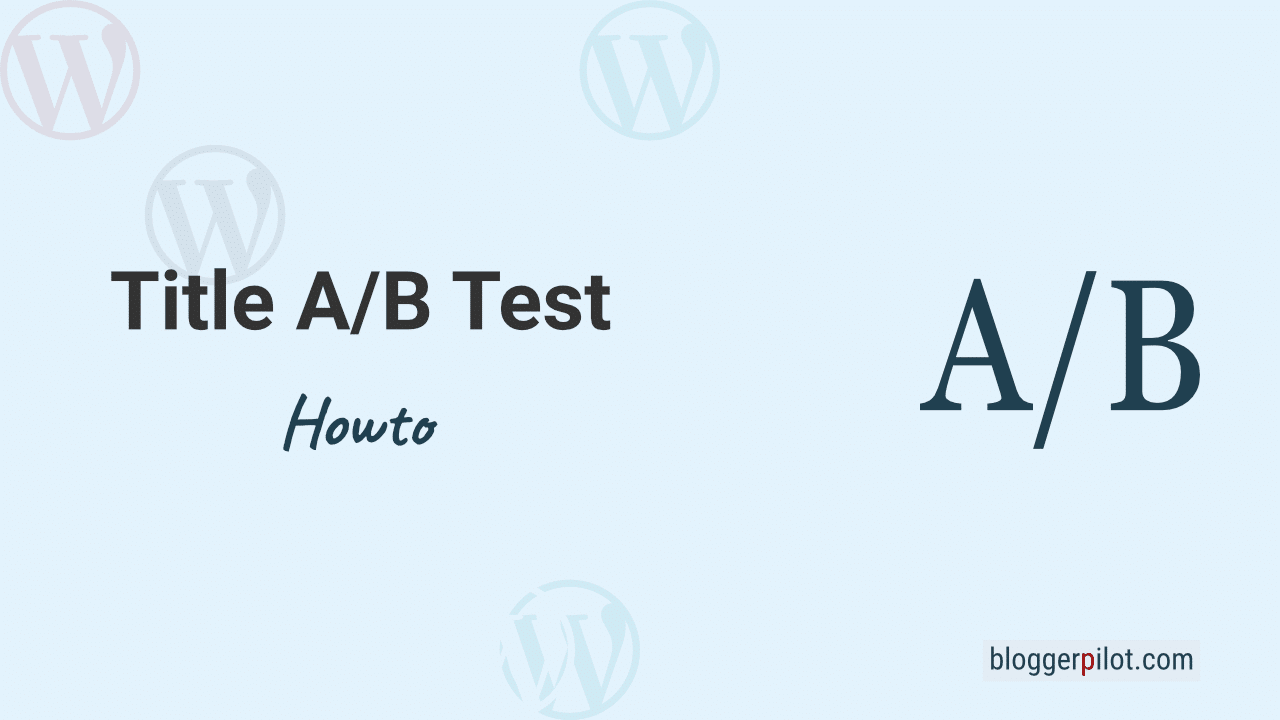 Have you ever thought about A/B testing for your WordPress Title? With the A/B test condition, you can apply up to four content versions. This way you can see which of your versions is the most effective. For a more complex analysis, you also have the option to sync the dynamic content with Google Analytics.

With If-So’s A/B testing condition, you can customize any content on your website. This applies to images, titles, texts, buttons and calls to action. Through If-So’s built-in analytics, you’ll find out which content version is most effective.

A/B testing sets up a random experiment. With this, users of your website are shown different versions of content. You set these up beforehand. The point here is that you can track basic metrics(views and conversions).

For the instructions in this article, you need the WordPress plugin If-So.

When you set up an A/B test, you need to use at least 2 alternatives. I’ll show you how to do this below in points 1 and 2. To set up multiple alternatives, follow steps 3 and 4.

To set up an A/B test with 2 versions, you must set version A for 50 percent of the sessions.

To create 3 alternatives, you must change the percentages in each version. You can see how the settings should be in the above pictures.

As you can see, for 4 alternatives, you have to adjust the percentage again.

It is especially important that you activate the repeat-option. And this in every version. No matter if you create 2, 3 or 4 alternatives. This way, you make sure that the same version is shown to every user.

What are A/B tests and how do they work?

A/B tests, also called split tests, are used as a marketing experiment. It allows you to split your audience to test different versions of a campaign. This helps determine which version performs best.

What are A/B tests?

Because different audiences behave differently, A/B testing is considered a valuable tool. After all, what works for one company may not be just as good for another.

For you to run A/B tests, you need to create at least two different versions of a piece of content. The important thing here is to introduce changes to a single variable. Then, show the two versions to two different audiences of similar size.

Next, you perform a corresponding analysis over a certain period of time. This period should be long enough for you to draw accurate conclusions about your results. This way you will see which version performed better, and you can apply it.

For example, to increase the conversion rate of your website, you can perform the following types of A/B tests:

With these types, you can determine if, for example, the CTA button (call-to-action button) needs a new placement and, secondly, see if changing the color of the CTA button can increase the click-through rate.

What steps should you take before A/B testing?

To start A/B testing, you need to take some precautions. These are described below for you.

Choose a variable to test: so you can assess how effective a change is, you should take care of isolating an independent variable. Then measure its performance. Otherwise, you will not be able to determine which variable is responsible for the change in performance.

Identify your target: Several metrics can be measured during a test. However, you should select one primary metric. You must then focus on that metric before running the test.

Before A/B testing, divide up sample groups: For A/B testing, where you have more control over your audience, you should test two or more equal audiences. This is the only way to get conclusive results.

Decide on the significance of your results: Once you’ve chosen your target metric, you need to think carefully about how significant your results have to be. This will help you justify why you choose one over another.

Run only one test per campaign at a time: Even if it’s not the same asset, you should only test one thing per campaign. Multiple tests will only complicate the results.

Give the A/B test enough time to produce useful data: The more traffic you get, the shorter the duration of the A/B test. So if your business isn’t getting that much traffic yet, you should let the A/B tests run for several days or even weeks.

Get feedback from real users: You can do this by conducting a survey , for example. This will give you clear answers as to why your users did not click on a certain CTA, for example.

What to do after A/B testing

There are some steps you should take after A/B testing:

However, it is important to read your A/B test calculations. Therefore, you should take a close look at the target metric after the test. This is usually the conversion rate. Then compare your conversion rates.

Here you will see that one variant has performed significantly better than the other. Finally, break down your results by target group segment. This way, you can understand how each key area responded to your variants.

What are the benefits of A/B testing in marketing?

The biggest advantage of A/B testing in marketing is that it has little cost, but a lot of benefit. Other benefits include these:

Even if an A/B test should fail, the financial losses are very low. In addition, you can make the following A/B test more well-founded. If it is successful and results in increasing revenues, you will always have the costs for the test in the end.

More articles about the plugin If-So

A/B tests are helpful tools to adjust the content exactly to your users. Whether you want to adjust titles, texts, calls to action, buttons, or images. Start A/B testing today to increase your conversion rate.