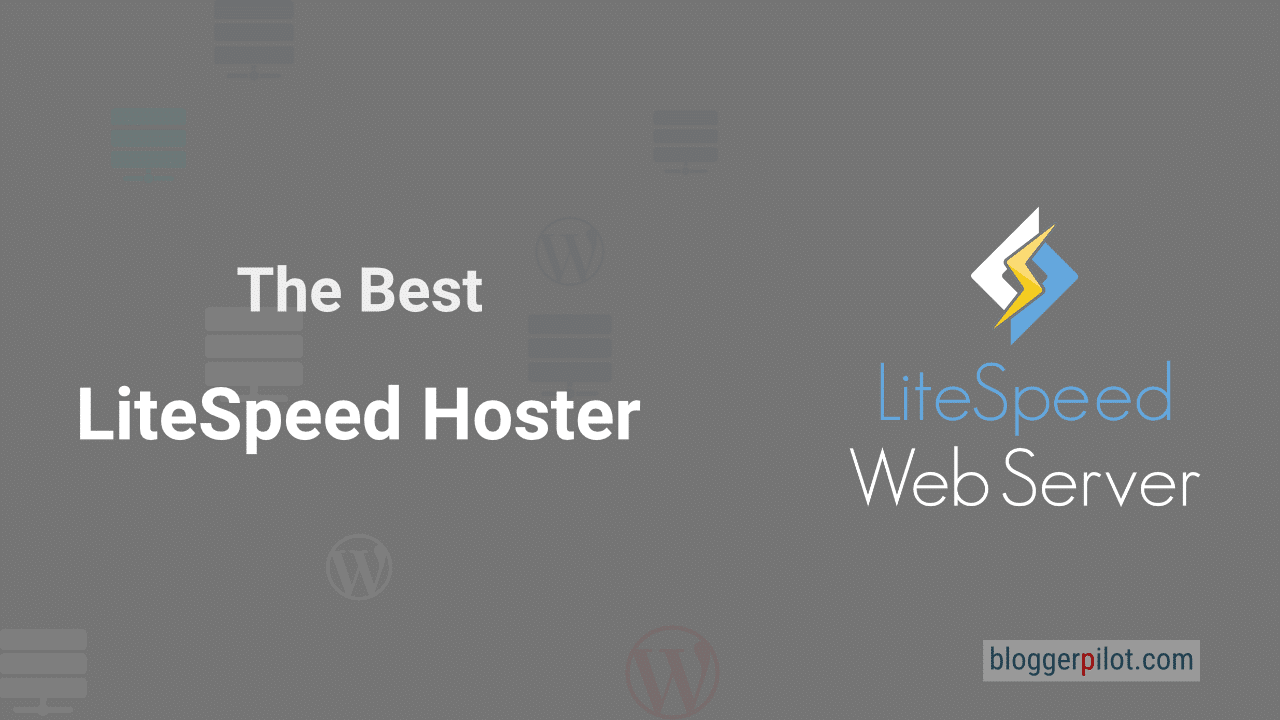 Surely the name Apache means something to you. Apache is a web server that has been around for a very long time. Most people will have chosen Apache as their web server when they built their first website. Or the hoster simply didn’t offer anything else at the time.

Then came the trend of Nginx, because that worked much faster and more efficiently, but unfortunately was also much more complicated. Today, on the other hand, LiteSpeed is the star and LiteSpeed has clearly come to stay.

LiteSpeed hosts have a significant speed advantage over Apache and Nginx. This results in faster loading websites and higher user satisfaction. I’ll show you the best LiteSpeed hosters with data centers in Germany and Europe.

This is because the LiteSpeed web server is largely compatible with many Apache-specific settings, such as the .htaccess file. Thus, most aspects can be transferred from the old system without any problems and work under LiteSpeed almost the same way as before under Apache. So the changeover is correspondingly easy.

INFO: What is LiteSpeed Hosting anyway?

Which LiteSpeed hosters there are and which of them I can personally recommend to you, I will explain a bit more in this article. Be curious and read on.

What to look for in a LiteSpeed Hoster

So you are used to Apache or Nginx and LiteSpeed is still a completely new world for you? That doesn’t matter, because the webserver doesn’t work much different than Apache, which is the standard for web servers. You can use your .htaccess file and get started right away.

Theoretically, LiteSpeed requires significantly less resources than comparable systems, with better performance, mind you. In practice, however, you will get ordinary server configurations, which therefore do not differ from those in the Apache server area in terms of hardware. So you just end up with more power for the same price, if you want to put it that way.

LiteSpeed also offers ready-to-use plugins for all major systems. With this, you can use LiteSpeed Cache in conjunction with WordPress, for example, as easy as pie and speed up your entire blog beyond measure. This works better than with comparable caching solutions because LiteSpeed Cache works directly with the RAM. This is much more efficient in delivery, which inevitably leads to shorter loading times.

The best LiteSpeed hosters from Germany

There are now some, but still not too many providers with servers based on LiteSpeed. However, this should become much more in the foreseeable future, because LiteSpeed will certainly become the new standard, especially in the WordPress area. To give you as wide a choice as possible, I’ve picked out the providers from Germany that are worth a look.

Here, there are different rates that start from about 15 euros and are completely focused on WordPress. If you want more, you can also rent virtual servers from this provider, which also run under optimization.

The functional diversity on it’s best. From HTTP/3 to Brotli compression, to ESI and caching support, which incidentally also applies to WooCommerce, everything is available. So, an ideal hoster if you use WordPress and want to greatly accelerate the CMS via LiteSpeed

A2 Hosting is very popular internationally, due to absolute top speeds and the appealing prices.

Data centers are available in Amsterdam, USA and Singapore. Unfortunately, there is no server location available in Germany, but Amsterdam is a very good alternative.

With an advertised uptime of 99.9 percent, you can’t go wrong.

With shared hosting, LiteSpeed server and the LSCache are ready from the Turbo plans. The cheaper packages are therefore not recommended.

Hostinger was born in Lithuania in 2004. Since then, the LiteSpeed provider has been impressing with a lot of service for little money.

Besides WordPress hosting, cloud hosting, VPS and even Minecraft hosting is available. Email servers and domains can also be purchased separately.

The smallest package is even available starting at $1.99 per month. However, for the sake of comparability, I’ve entered the next highest in the hosting comparison table.

Continue with Linevast Hosting from Germany. The provider delivers reliable hosting and equips all web hosting packages with LiteSpeed by default.

In the case of servers, Litespeed is an add-on, as a corresponding license becomes necessary here. However, the packages themselves can be booked extensively and even with up to 2 gigabytes of RAM and 200 gigabytes of NVMe SSD.

Modern hardware that runs at its best thanks to LiteSpeed and has incredibly fast delivery times thanks to the integrated LiteSpeed cache.

Chemicloud’s LiteSpeed hosting scores with the largest range of selectable data centers around the world. Directly on their site you can also do a speed test for each position.

Again, I chose the second best package for comparison, as the cheap one only supports one website. With $ 13.90 the provider is in the middle price segment.

The hoster Dogado does it differently and currently does not offer LiteSpeed for all hosting packages, but only for the hosting of Shopware. Shopware is a store system, so of course it benefits greatly from the performance that LiteSpeed can provide.

Nevertheless, this is only interesting for those who want to run a store. Dogado promises up to 40 percent faster response times compared to Apache servers or other systems.

Moreover, WordPress can also be installed on the package.

Rackspeed also has extensive offers with LiteSpeed as web server software. In general, everything at Rackspeed seems to have been optimized for the best possible performance.

The offer includes classic hosting, as well as managed servers based on LiteSpeed and much more.

Rackspeed clearly focuses on high performance, which is very pleasing. After all, reliable accessibility and the best possible performance is ultimately what separates a good hoster from a bad one.

FastPress also initially appears as a pure WordPress hoster and, like the others, offers its own servers that run on the basis of LiteSpeed.

The provider advertises that over 80 percent of its own customers have loading times below 1 second.

With LiteSpeed, database cache, Quic, Brotli, HTTP/3, Anti-DDOS and other features, a sustained WordPress performance should be guaranteed. The nice thing about FastPress is that everything can be easily turned on or off with a slider. This makes it easy for beginners to safely try out the various functions.

I also like the simple pricing policy. There is currently only one package and that costs 20 euros and includes everything that is necessary for your own WordPress blog. WordPress hosting can be that simple now and then.

UltaHost offers many locations for your blog. That’s why I didn’t want to leave out this alternative.

If you need a complete server with LiteSpeed, Liquid Web is the best provider for you. It’s best to ask for it directly at the support.

What to keep in mind if you want to run a blog based on WordPress is that not every LiteSpeed hoster is automatically a WordPress hoster. WordPress, like almost every other application, benefits from the so-called LiteSpeed Cache, but it is not necessarily the only or best solution for the content management system. Something like this can never be generalized. And that is a good thing.

WordPress hosters are therefore not automatically LiteSpeed hosters. If LiteSpeed is particularly important to you, you need to pay attention to it accordingly. Usually, a WordPress hoster is the so-called managed webhosting anyway, which is why you have no direct connection to the web server software. So basically you don’t have to care about that, as long as everything works fast and effectively.

However, if you want to rent your own server or webspace, with which you plan to do more than just a WordPress blog, LiteSpeed has many advantages. In this case, I recommend that you make sure to use LiteSpeed as your web server right from the start. More information about WordPress in connection with LiteSpeed, you can find on my WordPress hosting topic page.